I’ve never shared this with anyone publicly... In elementary school, I got phone calls everyday from my son’s teachers. They made me disgusted to be a parent because they were also my coworkers. They would send him to my classroom when he misbehaved; when I had a classroom of 24 students already. This was the hardest time of my life. He was in a school that was about 2-4% African American. I became so stressed that I took him to see a doctor and got him some medication for ADHD because that’s what my coworkers suggested; said it would be better for him. I started giving him small doses of the meds in 3rd grade and also started researching ways that boys learn and how teachers could help them. I felt like killing myself when I would give him that medication. I felt like a total failure, but those were the only days I had peace in my life. I stopped the meds after a short time because I thought “There has to be a better way.” Neiko was always the youngest in his class. He’s born at the end of August so he was always labeled “silly, not a good listener, easily distracted.” This is why I always tell parents that rush their kids to start school to keep their kids at home/preschool another year before starting kindergarten if they are born in August/September, especially boys. When Neiko was in 5th grade, it was time to find a middle school for him and I saw on my district’s website about an all boys school opening the following year. I immediately applied. Maybe they would understand my son more... Neiko was not trying to hear “all boys, suit, tie, dress shoes everyday.” He was angry at my decision for the first few weeks of middle school. The complaints stopped after about a month. I immediately saw a difference. His grades improved. The phone calls ceased. I began to feel better as a parent. He attended Mickey Leland College Preparatory for Young Men throughout middle school. This school created a positive, college driven environment for young boys. Neiko would come home and mention colleges around the world I had never heard of. For high school, he begged me to attend a “normal” school. I enrolled him at Manvel High School. What a mistake! His intelligent, college driven conversations changed. He talked about nothing but football, girls, Gucci belts and Jordan tennis shoes he wanted. I got calls from the teachers again. Neiko’s grades declined; he was so distracted. I allowed him to play football but when his first progress report came home, I removed him from the team. I told him he was returning to the all boys school for 10th grade. Once he returned to the all boys school, he became defiant. The dean overheard him and some other boys say “If we flunk out, they’ll kick us out.” Basically they were plotting to fail the first semester. Neiko’s grades were so poor in 10th grade. I began to feel like I was failing him as a parent. I called on his dad for help because I had worn my little brother out. Plus Neiko wasn’t my brother’s son. My brother was a kid himself. His dad and I had ONE disagreement where I forgot to tell him I was taking Neiko to the doctor and I picked him up from school. His girlfriend showed up and flipped out. I thought “Hell I’ve been the one responsible for appts for years. I forgot one time to communicate that. Wow” Well, living with his dad lasted every bit of a few weeks and he was back in my care. At that time, I said “Forget it. It’s up to me to be responsible for him.” He began to hang out with better friends that were upperclassmen and more focused on the future. I could tell he was finally growing up. Life was getting better...finally. It was time to decide on which college Neiko would attend. I thought to myself “If he even gets into any colleges” because his grades suffered so much the first half of high school. Neiko’s school participated in an early acceptance process for all his colleges so he knew early on. He was accepted into eleven universities. It brought me so much joy as a mom, regardless to what college it was, he was in and had options. We received an early acceptance email from #Morehouse and shortly after they sent an email saying Neiko’s was sent in error and that he indeed was not accepted. I thought “Oh hell no! Let me call someone.” but I didn’t have the energy to go to war with them. Instead, I asked God to place Neiko where he belonged. He changed college selections every week and I just rode the wave. Then, Morehouse came along and sent him a letter. If he increased his test scores and GPA, they would reconsider his entry and let him know during the general admissions entry. I thought “Man forget Morehouse. I don’t like how they handled you.”

A few months later after the final selection grading cycle and testing period, Morehouse sent Neiko an acceptance letter welcoming him to “The House.” I had already asked God to show me where he should be. This was clarification. He went from mistakenly being accepted to formally working his way in. We flew to Atlanta. I was 36 weeks pregnant at time praying I wouldn’t have an ATL baby. We arrived at Morehouse and they told us “Your son can’t move in. We don’t have all his financial funding nor payment plan. Come back tomorrow or it may take 48-72 hours to process.” I prayed. As I’ve matured in life, that’s all I really know how to do these days when things go wrong. I just knew MY GOD hadn’t brought us that far to turn us around. We showed up the next morning and the gentleman said “So why are you all in this line again? All of your funding is here and in place. He’s supposed to be moving in today.” I just looked above and said “Thank you Lord. Thank you.”

This post is to let moms out there know that your son doesn’t have to be perfect, or the smartest, the most well behaved or come from the best home life. It’s up to him to ultimately decide what he sees in his future. We all make mistakes. I asked Neiko to give me one quote that best described his journey, he said “Failure is the condiment that gives success its flavor” -Truman Capote. I’m so proud to now be raising a #MorehouseMan. I already see a difference. Thank you to everyone thus far that has ever given him a chance. 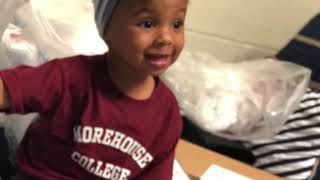 I Scream for Ice Cream!

The Pink Palm Resort...It's a Lifestyle!

Welcome to The Pink Palm Resort